The description of the Italian Center of Phenomenology.

The Italian Center enjoys the support of well known scholars from various academic environments (Rome, Siena-Arezzo, Catania, Macerata, Padua, Genoa, Palermo, Naples, Messina, Trieste, Viterbo, Parma, Pisa, Bari) who are inspired by their common desire for renewal. The scope of the Center, which it shares with The World Institute, is in fact that of developing a new philosophy of man in the culture of our times and, more particularly, in Italy, where the lack of a valid philosophical orientation as become apparent ever since the end of historicism.

In more concrete terms the project of reform is based on the further development of the phenomenological method critically proposed by Husserl and thus to respond to: 1. the need for interpreting scientific progress in such a way as to make it meaningful for human life; 2. the consequent urgency of establishing a new foundation for communication among the sciences, which in the past have moved further apart; 3. and finally, the need to give a valid foundation for what we seek now under the concept of “interdisciplinarity”.

Phenomenology indeed has shown itself to be the type of inquiry that best responds to these urgent needs of our culture, because it seeks the common root of the sciences in relation to man, studying his characteristics and his potential and analysing the telos of his destiny.

During the five years since it foundation the activities of the Center have comprised a series of international research seminars and conferences, on the one hand, and, on the other, monthly meetings devoted to the discussion of the significance of phenomenological methodology in the various fields of research and in the relation to other philosophical schools and currents. Two seminars were held together with the International Husserl and Phenomenological Research Society, directed respectively by A.T. Tymieniecka and Angela Ales Bello (organized in collaboration with cultural associations and university institutes) in March 1976 and March 1977 with the themes of “The Great Chain of Being” and “Creativity”. Also jointly organised, The International Congress at Arezzo/Siena was held in July 1976 on the theme “The Teleologies in Husserl’s Phenomenology”, while a seminar at Catania and Vulcano from 26 September to 2 October 1977 was dedicated to the discussion of “Man and Nature”.

Discussions during the academic year 1977-78 were centered on the theme “Critical Bibliography of the Works on Husserl’s Phenomenology Published in Italy” (with A. Rigobello, E. Baccarini, F. Liverziani, P. Valori, A. Ales Bello, A. Rizzacasa, G. Giannini, E. Costantini and B. M. D’Ippolito acting as rapporteurs for the various sectors of research). On 20 May 1978 the Second Annual Conference was held in Rome on the theme “Man and Nature” (the participants in the discussion included, among others, prof. A.T. Tymieniecka and prof. Pietro Prini, Director of the Specialization Courses of the Teacher Training Faculty of Rome University).

The Italian Center also collaborated in the organization of the International Congress of The World Phenomenology Institute held in Paris from 7 to 10 July 1978, where the Center was represented by professors M. Sancipriano, R. Raggiunti, A. Ales Bello and B. M. D’Ippolito.

The monthly meetings of the academic year 1978-79 were dedicated to a panorama of phenomenological research in Italy and culminated in the Third Annual Conference at Viterbo (24-25 February 1979). The major part of the lectures focused upon the human sciences; however, at a special session Cardinal K. Wojtyla’s ideas were extensively debated for the first time, and prof. A.T. Tymieniecka introduced the Cardinal’s major opus in phenomenological anthropology entitled  The Acting Person (Volume X of Analecta Husserliana).

The papers read during the monthly meetings as well as at the Viterbo Conference brought out the variety and the vitality of phenomenological research in Italy, as regards both the problems of method (F. Costa) and the applications in the various sectors, including morality (P. Valori), psychiatry (B. Callieri, E. Borgna, M. De Negri, L. Paradisi, V. Rapisarda), history (B. M. D’Ippolito), language (E. Raggiunti), science (A. Rizzacasa), and others. One can note, that the section of the center dedicated to “Phenomenology and Human Sciences”, which was constituted as the part of the International Society of Phenomenology and Human Sciences founded during the International Congress at Arezzo and Siena in 1976, was particularly active during the past years.

The Center maintained its international contacts in 1979 by inviting numerous foreign scholars to the National Conference at Viterbo, including H. Köchler (Austria), R. Magliola (USA), J. C. Piguet (Switzerland), M. R. Barral (USA) and M. Petit (France), and also by extending hospitality at its April Seminar (held at the Teacher Training Faculty of Rome University) to prof. H. Meyn of The World Phenomenology Institute, who spoke on Historicism and the Idea of Philosophy as a Rigorous Science.

The activities organized by The Italian Center since its foundation have given a considerable new impulse to phenomenological research in Italy. They have made established contacts between numerous Italian scholars who previously worked in isolation without a continued and effective exchange of the results of their researches, and they have also strengthened and extended relation with the international phenomenological community, thereby creating a cultural pattern of cooperation which becomes more and more concrete and fruitful. 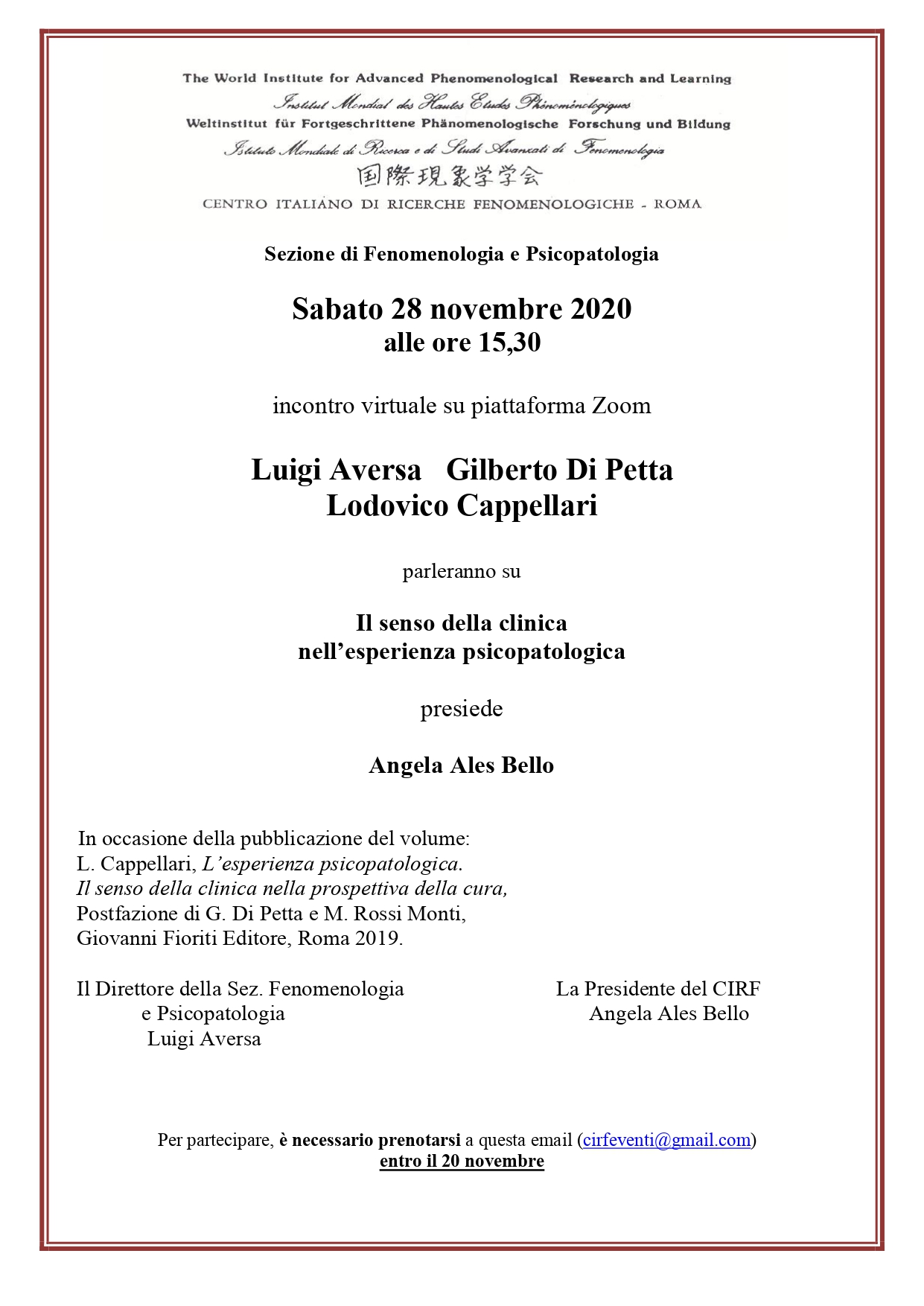